Thinking of Selling Half? Watch This First…

Thinking of Selling Half? Watch This First…

Is selling half of a winning trade smart?

Many traders say it is. It’s one of the most popular strategies I see. And it’s not just retail traders. Plenty of professionals agree. There’s something about partly cashing out a profitable trade that appeals to people.

I know a bit about this strategy… it’s one that I’ve used a lot over the years. I’ve also seen many colleagues scale out of positions. If popularity is any guide, selling half must be a winner.

Now, there are lots of variations to this strategy. Mostly they involve the timing of the sale. Some traders use a technical indicator as a guide. Others use a dollar value or a fixed percentage.

But there was one I liked best — maybe you’ve tried it yourself… This is how it went: I’d sell half when the profit covered my remaining risk. This meant my worst overall result was breakeven. I reasoned that it was like getting a free trade.

If only it was that easy…

Yes, it felt good to bank a profit. It was also nice to know I wouldn’t end up with a loss. But there was a glaring hole in this strategy. You see, I was halving the size of my winning trades relatively early. Meanwhile, my losing trades were all full strength. This meant my winners had to work extra hard.

Think of it like this: A footy coach doesn’t rest his best players after the opening minutes. He’ll give them time to make an impact. This maximises the team’s strength.

The same logic applies to trading. A portfolio makes the biggest gains when its best trades are firing. Reducing exposure to them is like putting your top players on the bench.

But say you have a big profit. Is it wise to consider banking half?

Now, there are two ways to assess a strategy: You could use trial and error — like I did when I began my career, or you could use back-testing to simulate real life trading.

One of the biggest disadvantages of trial and error is that it takes time. It could take years to get a result. But you don’t have this issue with back-testing. You can learn more in one afternoon than in a few years of live trading.

So, this is what I did: I designed a simulation to see which method makes more money — the first scenario holds each trade until it hits a trailing stop, while second scenario sells half when a trade is up 100%.

What do you think will happen?

Will running profits make more money, or will selling half win the day? 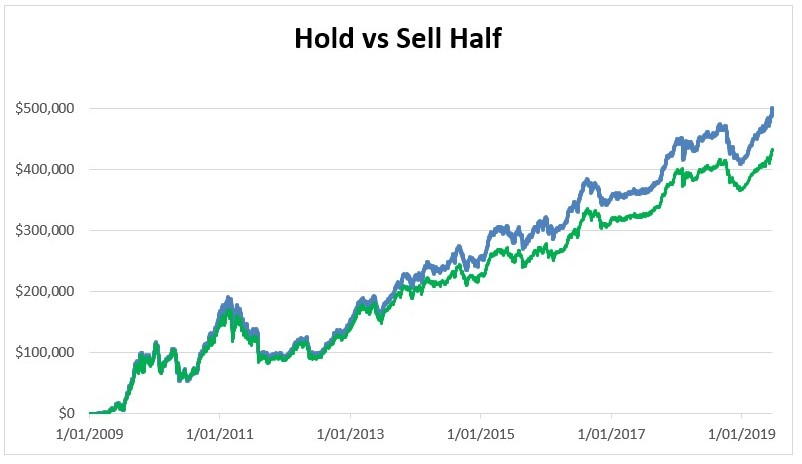 Let me explain what’s going on… the simulation runs for 10 years from 2009. It assumes investing $1,000 in every trade my system identifies. And there’s no allowance for costs or dividends. The simulation tracks hundreds of individual trades, so it’s not relying on one or two results.

You’ll notice a high correlation between the profits for both strategies. But the blue line is gradually pulling away — it has an edge. Which method do you think this is? I’m sure you know. It’s the one that keeps the entire position.

The result from this test is clear cut. Resisting the urge to sell half produces a better overall outcome. The strategy that let’s the entire winning trade run does best.

You know, a few big trends could really boost your overall returns. These large moves don’t come along every day. So when they do, I suggest thinking carefully before cashing in part of the gain. 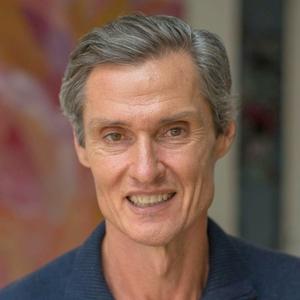