The Trade They Said Was Impossible

The date was 17 June 1999, and the dealing room was unusually quiet. A big announcement was pending… one that would turn my life and career inside out.

You see, my employer — Bankers Trust — was no longer. A takeover by Deutsche Bank had lowered the curtain on a Wall Street titan.

It’s amazing how quickly a situation can change. BT was the envy of many in the mid-1990s…a financial juggernaut at the top of its game. But it was all over just a few years later. And that’s life in the financial markets — the ‘unthinkable’ often becomes reality.

It’s funny looking back and joining the dots. While I didn’t know it at the time, Bankers Trust’s end was a golden opportunity… it was my chance to go it alone. And I’ve been my own boss ever since. I just needed that initial nudge outside of my comfort zone.

This is also when I made a big transition. I went from trading the bank’s money, to trading my own.

So this week, I’m going to tell you about my most satisfying trade. It took place a few years after leaving BT. It’s a trade many people told me was impossible for a private trader. I think the result is going to surprise you.

But first a bit of background…

So, it was 2007, and I began developing a new algorithmic trading system for the futures markets. The aim was to trade medium-term trends that could last for around 18 months.

Now, many people told me that futures were too risky to trade for more than a day or two. They said volatility was a killer in futures trading. In their view, I was out of my depth.

But I didn’t agree. You see, markets trend…and futures are just another way to take a position.

So, on 16 August 2010, the system gave me a signal to buy gold futures. It was no different to any other entry signal, and I took the trade without a second thought.

Now, a critical part of all my trading systems is the stop-loss. This is my exit point if a trade isn’t working. And for this trade, my risk was $18,483 — that’s what I stood to lose if it was unsuccessful.

So here’s what happened next. The trade got off to a good start, and within two months I was up about $75,000. Many traders would be quick to lock in this sort of gain — the urge to take a profit can be strong.

But when you have a system, it’s all about the rules.

And two of my key trading rules are:

So that’s exactly what I did.

And the result was amazing: Gold ran, and ran, and ran. In fact, it ran for 12 months. So much for the naysayers who said futures were too volatile to trade medium-term!

This brings me to the trade’s exit. Now, many people struggle when it comes to selling. All too often, I hear stories of traders getting out way too soon. Another problem is they hold a good trade all the way back down.

A key part of successful trading is knowing when to exit a trade. And after 12 months, it was time to lock in my profit. 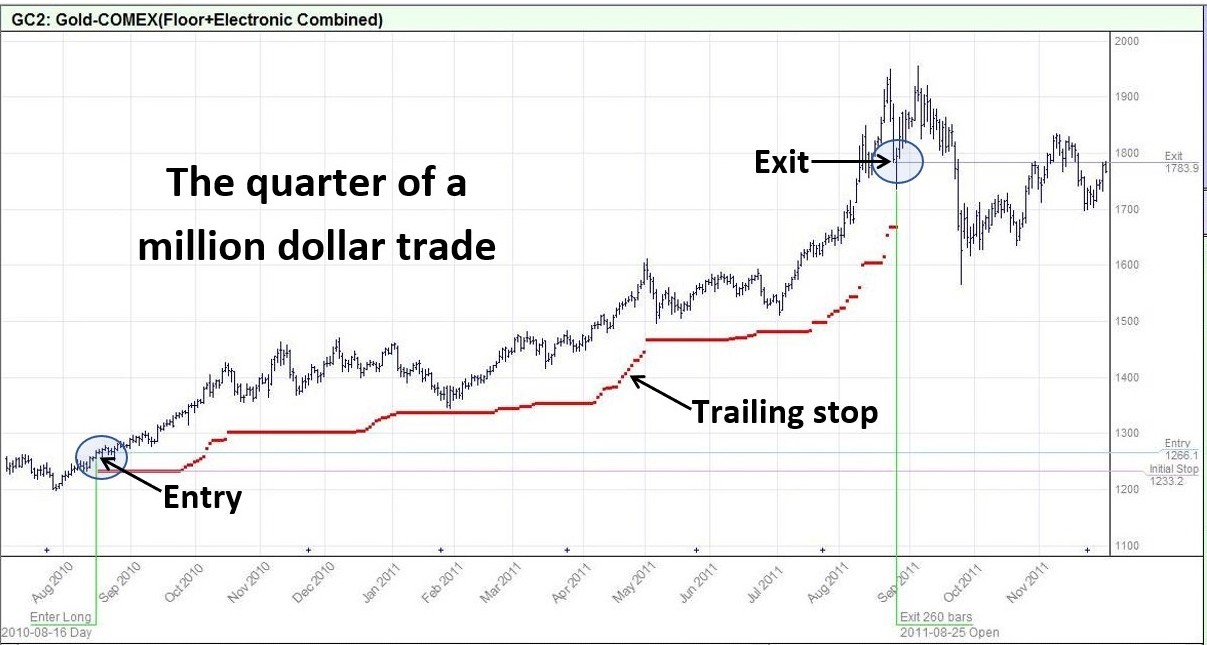 I turned $18,483 of risk into a profit of a quarter of a million dollars. That’s more than 13-times the initial risk, or a 1,300%-plus payoff. Now, this isn’t my most profitable investment. Nor is it my largest trade position.

But this trade is special… it’s special because it shows the power of trading rules… the same sort of rules that power my Motion Trader service… the same rules that I want you to make your own.

You see, the right trading rules could help you stay on big trends, they could also give you the know-how to exit your trades with consistency. I know the power of this first hand. It’s what makes the super profits possible.

So that’s all for this week. If you’re watching this anywhere other than my website motiontrader.com.au then come over and have a look. That’s where I have all the free stuff. I think you’ll like what you find. And if you liked this video, or even if you didn’t, scroll down and let me a comment.