Don’t Try This Gutsy Trade Yourself

Tell me, what’s the best movie line ever?

Just about everyone has a favourite, I’m sure you do too.

You know, I’ve drawn inspiration from many films over the years. But there was one that had a big influence on my early years as a trader. The movie’s name is Top Gun. And I still recall one particular scene vividly.

It’s set in the debriefing room after a training mission. The head instructor was analysing the battle tactics of one of the pilots — Maverick, aka Tom Cruise.

You see, Maverick had won a dogfight. But rather than praise his instinctive flying, the instructor says Maverick’s daring manoeuvres were a gamble — an example of what NOT to do.

At that moment, a fellow pilot leans forwards and whispers: ‘gutsiest move I ever saw, Mav’.

As a young trader starting out, this fearless, seat of the pants attitude to risk was appealing. And it’s with this mindset that I arrived on the Bankers Trust trading floor.

Now, one of my early strategies was to pick turning points. I would swoop in and buy when I thought a market was about to bottom. I wouldn’t wait for confirmation — that was for cautious types. Fearless traders took the market head on. They were aggressive and instinctive, like Maverick.

But I had it all wrong — ‘gutsy’ and ‘trading’ are two words that don’t belong together. You see, a gutsy call is against the odds. That’s what makes it so bold. Successful trading, on the other hand, is about waiting until the odds are in your favour.

Fortunately, I had some excellent mentors. They let my youthful bravado take an early hit, and then set about re-scripting my ideas on successful trading.

Okay, have a read of this:

‘I bought shares in Paladin Energy in December 2013. I’d be very interested to see how Motion Trader handled this one.’
Member, Neil

I really enjoy this sort of question. I believe it offers a great learning opportunity.

Let’s start with the chart:

Now, let me ask you a question. And I want you to go with your instincts. Would you rather buy this stock or sell it?

If you’re like many people, you’re a buyer. You’ll say the stock has lost so much value that it must be close to turning. And if it does, it could be up 100% in no time. The gutsy play is to swoop in and call the turning point.

Now sure, prices may boom again. But what if they don’t.

This is the same chart as before. The only difference is I’m including a basic trend indicator… the 50 and 100 day moving averages. These are the respective red and blue lines.

Now, notice how the red line is below the blue line. This means the trend is down. Motion Trader won’t give a buy signal while this is the case. Following this process can help you avoid many disasters. 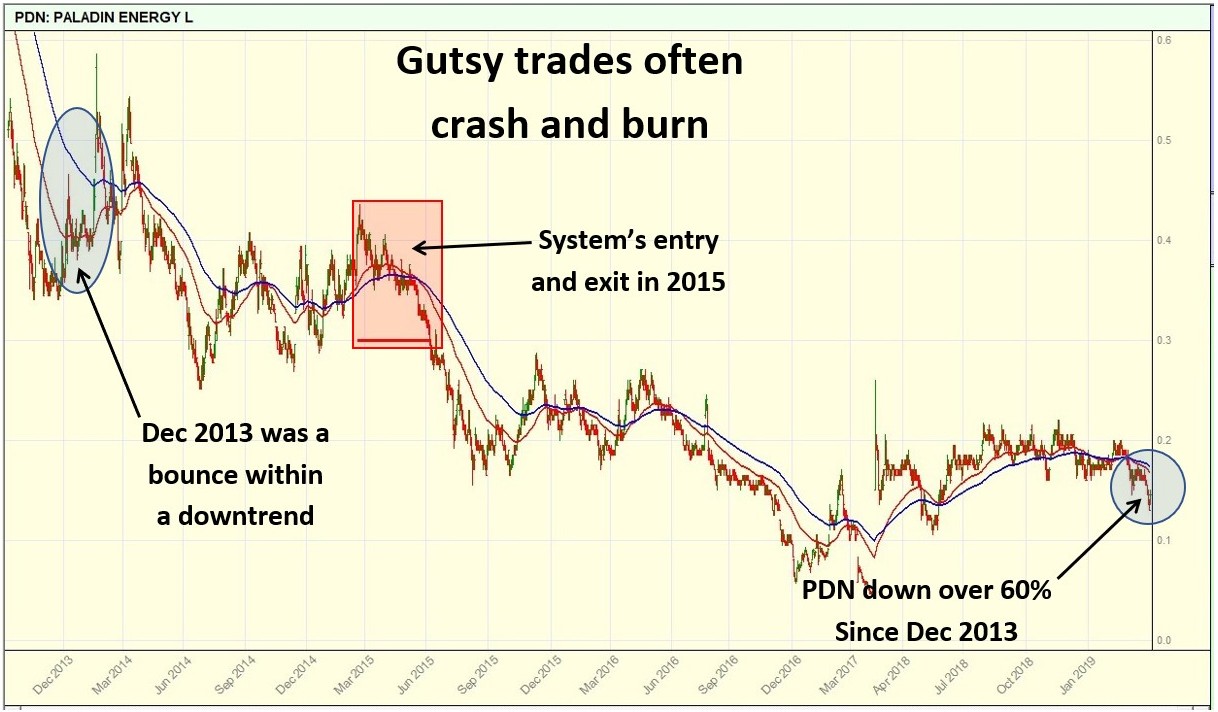 Member Neil asks about buying in December 2013. You’ll see I’ve circled this period on the left of the chart. With the shares down over 90%, many traders would have been punting on a turnaround.

But look at the moving averages. They never cross. This means Motion Trader was NOT a buyer.

The averages finally cross in February 2015, and with confirmation from other indicators, this leads to a short lived trade. You’ll see this in the red box. But Paladin soon turns lower and continues falling.

Motion Trader has a strategy for this possibility. It’s called a stop-loss. This can get you out when a trade isn’t working. The aim is to shield your capital from further losses.

Paladin is down around 60% since December 2013. And with the exception of a brief trade in 2015, Motion Trader has been on the sidelines since the 2011 peak.

So leave the bold plays for the silver screen. Your trading account should be all the better for it.

Now that’s all for this week. If you’re watching this anywhere other than my website motiontrader.com.au then come check it out. And if you liked this video, or even if you didn’t, scroll down and let me know what you thought.