Do These Mistakes Put You Off?

Now, I’m going to say something that may surprise you… it’s probably not what you’d expect an algorithmic trader to say…

Just like you and me, algorithms get things wrong.

GPS devices are a classic example. They mostly direct us with ease and efficiency. But occasionally they’ll get ‘lost’ and require a human to sort things out.

Take this for instance… a trio of Japanese tourists got a lesson in algorithmic errors in 2012. The students set off on a daytrip to Queensland’s North Stradbroke Island. But it all came to an abrupt end.

You see, their GPS didn’t account for the water crossing. The tourists got 500 metres into Morton Bay before getting stuck. They say the device was directing them to a road.

But this story isn’t a one-off. You’ll find many instances of GPS devices getting it wrong.

And it’s not just GPS algorithms. In a moment, I’m going to show you some mistakes from my trading algorithms. These were real trades with real money on the line.

So should you be wary of algorithms?

Well, I saw some interesting research recently. It found that after seeing an algorithm produce a bad outcome, many people will switch to human decisions. And they’ll do this, despite knowing the algorithm does better overall.

Okay, have a look at this: 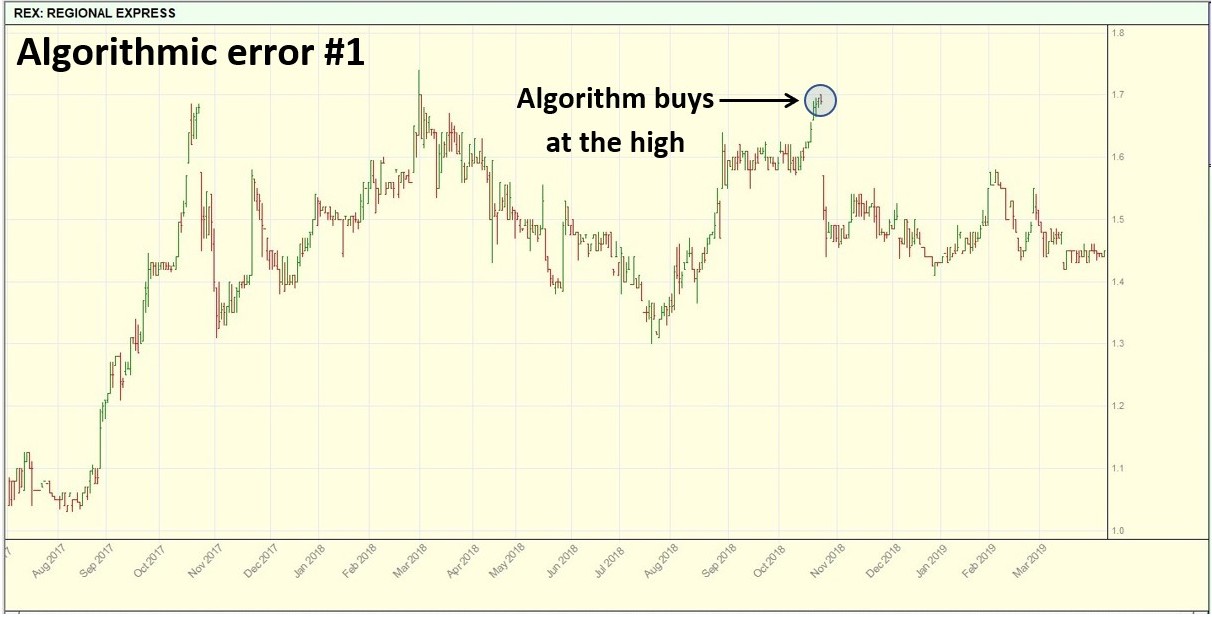 This is a recent algorithmic ‘error’ from my own share portfolio.

My algorithms gave a buy signal for Reginal Express Ltd [ASX:REX] at precisely the wrong time. The system’s entry point was at a peak in the share price. The stock fell heavily soon after. 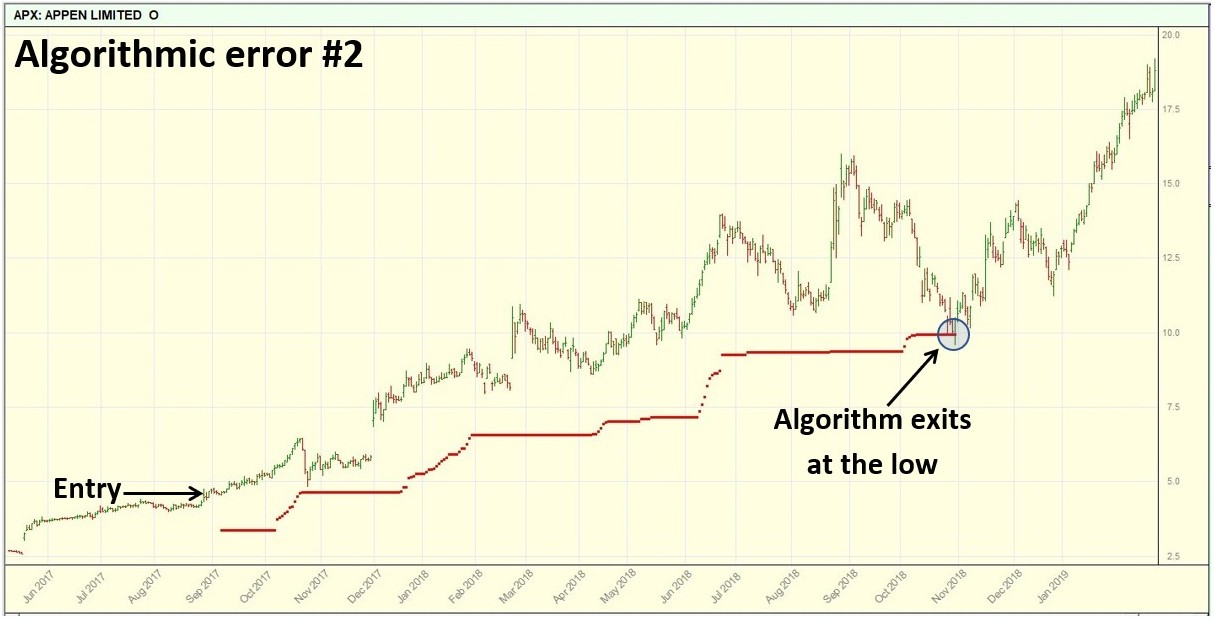 This was a trade I took in Appen Ltd [ASX:APX].

Unlike REX, my algorithms got the entry right. I made a 115% profit within 13 months. The problem this time was with the exit.

You see, my algorithms calculate the exit point for all of my trades. This removes the guesswork from when to sell. It also helps me manage my trades consistently.

But it’s not an exact science. APX hit its exit stop on the day the shares made a lasting low. The shares then rebounded and haven’t looked back.

Situations like these make some people wary of algorithms. As the researchers found, many people focus on what an algorithm gets wrong — not what it gets right. 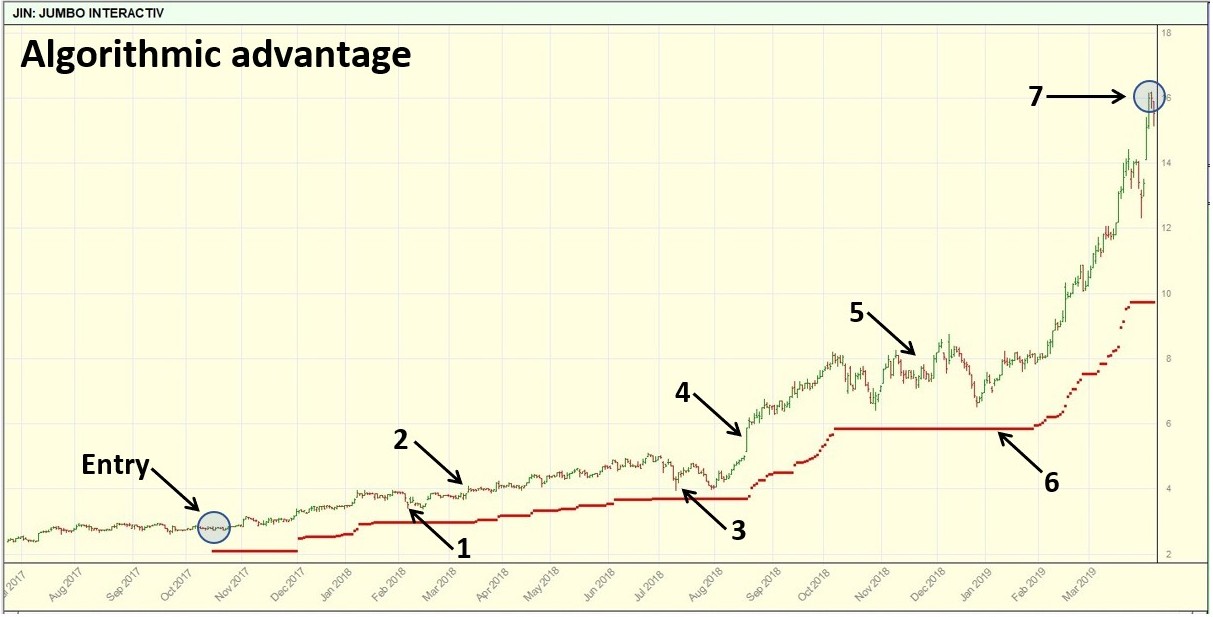 This is another trade from my portfolio — a trade in Jumbo Interactive Ltd [ASX:JIN].

Now, I’m going to ask you a question…and you need to be honest with yourself.

Could you get this outcome without an algorithm?

Here are some thinking points – follow the numbers as I go:

Finally, would you have even heard of Jumbo Interactive in the first place?

Sure, an algorithm can get things wrong. But it can also get a lot right.

I know that my own trading is better with an algorithm. My decisions are more consistent, my use of time is more efficient, I find more opportunities, I have less stress, and I make more money.

This could be a reality for you as well.

The age of the algorithm is here. I encourage you to use it to the fullest.

So that’s all for this week. If you liked this video, or even if you didn’t, scroll down and leave me a comment, or maybe a thumbs up. And let me know if an algorithm could help you trade better. Also, if you’re watching this anywhere other than my website motiontrader.com.au then head over and have a look.