Is Paladin Energy (ASX:PDN) the Next Mega Trend? 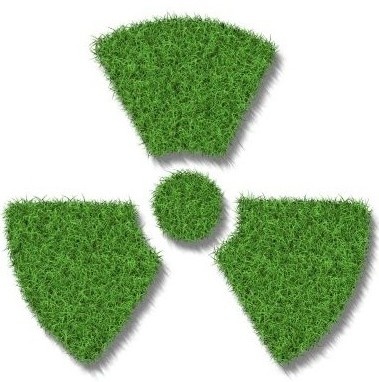 Jason McIntosh explains why Paladin Energy [ASX:PDN] could be an ASX stock to buy now. The company owns a globally significant uranium mine. Paladin was hit hard during uranium’s decade long bust. But with uranium a green play “in waiting”, it could be poised for recovery.

Uranium's been the bad guy on the block for decades. When we talk uranium or nuclear, a lot of people think of either weapons or accidents like Chernobyl or Fukushima.

But when you look at the facts, nuclear is one of the safest, cleanest, and most reliable sources of energy. And it could have a big role to play in reducing emissions.

In a moment, I’m going to tell you about Paladin Energy. It’s a local uranium play with a lot of upside potential over the new few years. And the recent pullback could offer an opportunity.

Uranium is a small and rather unfollowed segment of the market. And there's a real demand-supply story building. Demand is forecast to increase over the next 10 to 20 years. But supply currently isn’t there to meet that demand. They call this a “structural supply deficit”.

Now, the way to combat this is to bring on new supply. This could be done by scaling up production and opening new mines. But with the price where it's been for the last decade, there’s been little incentive to make such an investment.

In fact, many miners have been cutting production and mothballing mines. This is because mining was largely unprofitable at the prevailing prices. Exploration has also been less appealing.

Demand is another story entirely…

Global nuclear output has recently surpassed pre-Fukushima levels. And the interesting fact is that many of Japan’s reactors are still offline. This means the demand is coming from new sources.

The World Nuclear Energy Association say there are 52 reactors under construction around the world. There are also around 450 which are either planned or proposed. Some of these probably won’t eventuate. But even if a portion of them do, there's a lot of potential demand.

It’s important to remember that this is a relatively small industry. If the investment dollars start coming through, this opens the potential for some significant gains.

So what about Paladin?

Well, this is an interesting story.

This isn’t so much a story of a stock imploding. Rather it was about an industry collapse. Paladin's situation is common when you look at the share prices of uranium stocks globally. 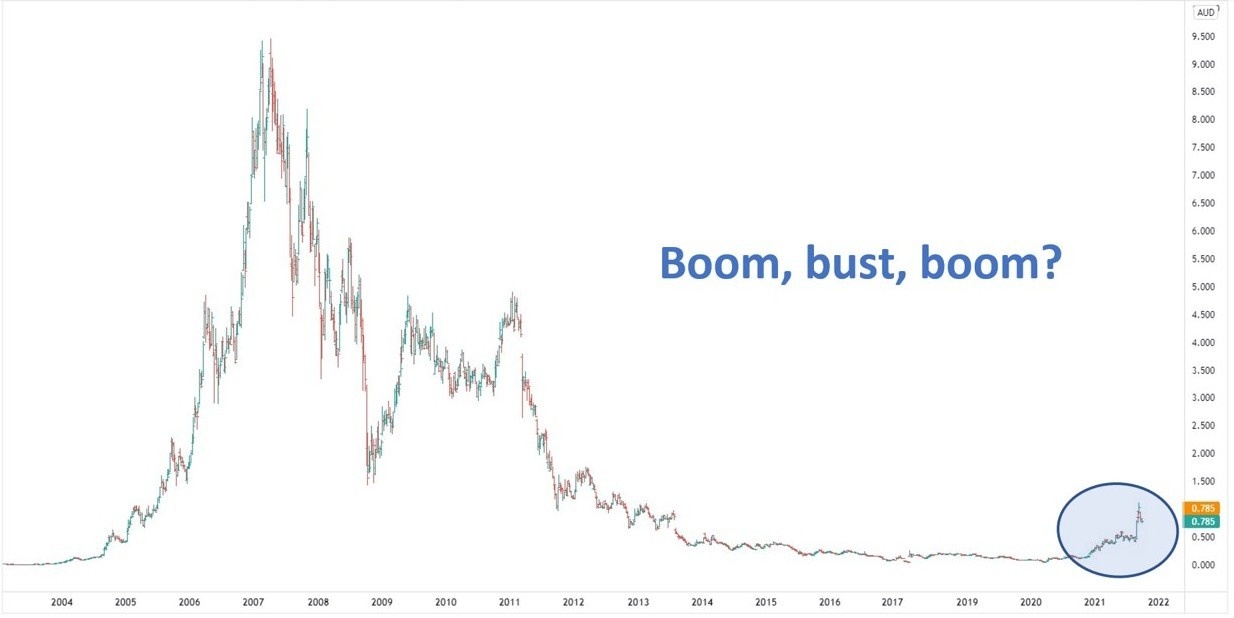 I’m starting with the weekly chart to put the latest price action into perspective.

While the recent rally has been impressive, the share price is coming off a very low base. Even a partial recovery of the pervious highs could provide scope for much higher levels.

The last 12 months has also had a big impact on the company’s ASX ranking. Paladin now has a market cap of around $2.1 billion, which recently saw it enter the ASX 300.

Paladin’s primary asset is a 75% stake in the Langer Heinrich Mine. The project is in the uranium friendly jurisdiction of Namibia, and is of global significance. Operations were suspended in 2018 due to low uranium prices. The company has a restart plan, and will consider a resumption of mining “under the right uranium pricing environment”.

Additional potential exists in Paladin’s exploration portfolio. The company has a significant resource base in Canada, Queensland, and Western Australia. The two Australian states don’t allow uranium mining at present. But if sentiment towards nuclear shifts in the future, there’s potential for these resources to come into play.

Paladin has a strong balance sheet following a $218.7 million capital raising earlier this year. The company has paid off debt and has US$30.7 million in cash (as of 30 June 2021). 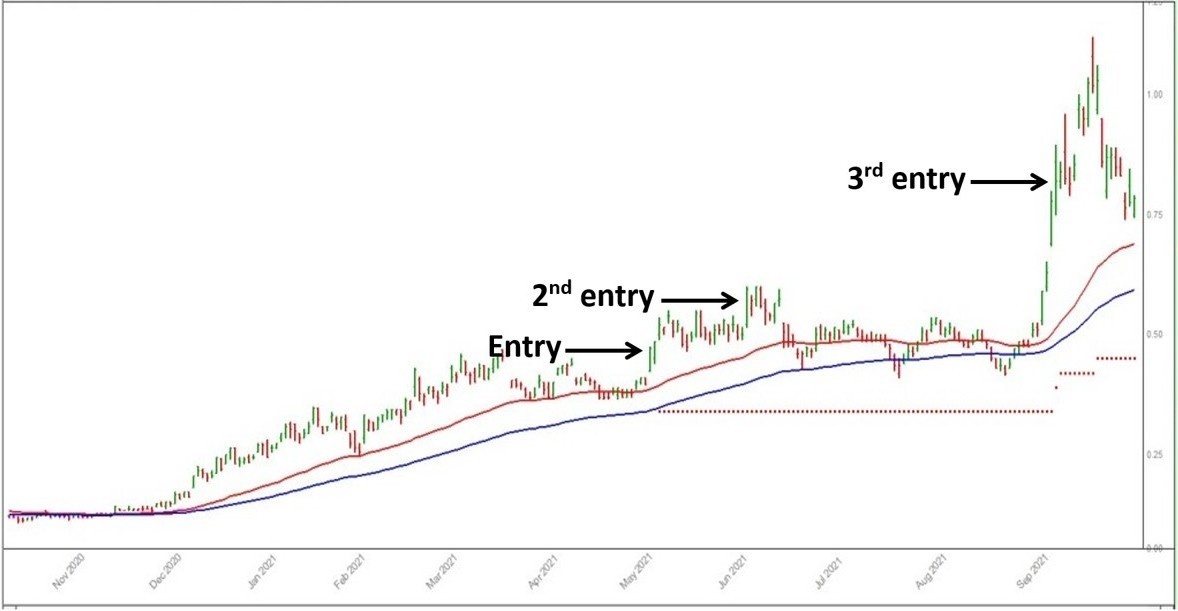 Motion Trader’s first entry signal was in March 2021 at 45 cents. There have been two subsequent signals at 56 cents and 82 cents respectively.

You may be wondering why there wasn’t an earlier signal. The chart shows Paladin’s shares were rising from last December, and the moving averages were positive.

The reason is due to Motion Trader’s volatility filter. Its job is to remove stocks that are moving rapidly (as many quickly fall back). And low priced stocks regularly trip the filter.

Paladin’s rally since mid-August is remarkable. The share price more than doubled in only four weeks. And it wasn’t just Paladin. Similar gains took place across the sector.

If you have uranium exposure in your portfolio, that’s good. But if you don’t (and you want some exposure) the question is how to go about getting a position.

The recent pullback potentially presents an opportunity. Prices have retraced about half the recent rally (a common retracement for a stock in a rising trend). They are also nearing the 50-day moving average which often provides support during a bullish phase.

“Buying the dip” comes with risk — a stock could continue dipping.

That said, I believe uranium has a strong underlying story. If exposure to the sector is of interest, then the current pullback could present an opportunity to consider.